PLAMENKA BOJCHEVA: WE ARE OPEN TO COOPERATION PERTAINING TO THE PROTECTION OF FREE ACCESS TO PUBLIC INFORMATION

The Agency for the Protection of the Right to Free Access to Public Information has completed almost 800 backlogged cases from 2018 and 2019, and the handling of complaints by information requesters proceeds regularly within the established legal deadlines, says the Agency’s director, Plamenka Bojcheva, in an interview for “Meta.mk”.

In 2020, the Agency received a total of 209 complaints for the first time, 193 were acted upon immediately, and the rest are ongoing.

In the interview, Bojcheva also talks about the challenges in operation, the penalties for not acting upon the request for information, the transparency of the institutions, as well as the role of the Agency for the Protection of the Right to Free Access to Public Information in the education of officials who have to provide public information.

What are the main operational challenges you are currently facing as an Agency for the Protection of the Right to Free Access to Public Information?

– The main challenge in the operation of the Agency is to raise its authority and credibility to a higher level by promoting it into a respectable and recognizable institution whose main goal and task is the provision of one of the basic human rights guaranteed by the Constitution of the Republic of North Macedonia – the free access to public information. In that direction, it is necessary to urgently re-equip the Agency, first of all, with professional and managerial staff. We have already started implementing concrete measures in this regard.

From the perspective of the legal competencies of the Agency, the operation of the Misdemeanour Commission, which was introduced for the first time by the Law on free access to public information in 2019, is a challenge. The Misdemeanour Commission has been established and started working. Many other tasks await the Agency. One of them is the updating of the List of holders of information, which is enriched daily with new entities, so out of a total of 1,257 holders at the end of 2019, their number has increased drastically and currently stands at 1,348.

Once the nearly 800 cases from 2018 and 2019 that had been pending were resolved, the processing of complaints from information requesters resumed on a regular basis, well within the statutory deadlines. Unfortunately, due to the current situation with the Covid-19 virus, the agency has had to delay all planned activities on this plan, including the training of officials with the information holders. Also, it will be difficult to create a manual/simulation for performing the harm test.

It is important to clarify that the harm test is used to determine whether or not disclosing a specific piece of information would be more detrimental to the legally protected interest than beneficial from the perspective of the public interest. 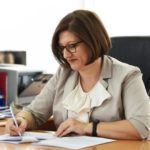 How does the Agency for the Protection of the Right to Free Access to Public Information penalize the holders of public information if they refuse to provide the requested information? When did the Misdemeanor Commission begin its work, and what types of punitive measures does it impose?

– As I mentioned in my response to the first question, punitive measures were incorporated in the 2019 version of the Law on Free Access to Public Information. There will be a fine of 500 Euros (or its Denar equivalent). For violations identified in Article 39 of the Law, the official person with the information holders is liable to a fine of 250 Euro. Other than that, the Misdemeanor Commission has begun its work, including the creation of the Rules of Procedure of this commission and the initiation of the procedure for the first cases.

According to your first-quarter report, 109 complaints were filed, 10 of which came from journalists and the rest from members of the public and non-profit groups. How many of these complaints have been resolved, and in whose favor?

– As of this writing in 2020, the Agency has received a total of 209 new complaints; of these, 193 have been resolved, and the remaining complaints are still being processed. As for the outcomes, 104 were found in favor of the claimants, 36 were halted at the claimant’s request because an answer to the claim was received during the appeal procedure, 28 were treated as untimely appeals, and the remaining claims were rejected.

According to the 2019 Annual Report on the work of your Agency, there was an increase in the number of requests for public information that were unanswered, rejected, or forwarded to another institution. Why has there been a downward trend over the past 12 months, and what factors contribute most to this?

– The data contained in the Annual Report for 2019 was obtained from the analysis of the annual reports submitted by the holders of information. The Commission at that time, now the Agency for Free Access to Public Information, acts as a second-level authority only after receiving complaints from applicants.

According to the Annual Report from the previous year, more than 16% of public information holders did not submit annual reports. Therefore, it is unknown whether and how many of these institutions responded to requests for free access to public information. Is there a possibility to publicly announce these entities, and what are the penalties for those who do not comply with this legal obligation?

– The answer to this question is contained in the misdemeanour provision for the official who will not prepare an annual report on the implementation of this law and will not submit it to the Agency.

Some journalists and non-governmental organizations complain that the holders of information on important issues of public interest do not respond or often only formally respond to the request by submitting partial answers. What is the role of the Agency in providing the requested access to public information in such cases?

– The role of the Agency as a secondary authority for dealing with complaints is to make a decision that will decide on the merits and oblige the holder to provide the requested information to the applicant. In case of non-compliance with the Agency’s decision, misdemeanour proceedings may be initiated at the requester’s proposal or ex officio.

Investigative journalists say that information holders, in several cases, have been more willing to pay a fine than to provide the requested public information, especially when it comes to matters related to tender procedures or corruption affairs. Do you think that the current legal solution offers adequate penalizing solutions for those holders of information who try to cheat the law?

– The current legal solution, apart from misdemeanours, does not offer other penalizing solutions. But let’s not forget the possibility that the requesters can initiate an administrative dispute before the competent court due to the non-action of the information holders following the decision made by the Agency.

As the COVID-19 crisis reached its peak, did you notice a shift in how state and local officials disseminated information to the public?

– Yes, with the establishment of the Agency and the fact that the secondary authority is already functioning (which was not the case in the second half of 2018 and 2019), as well as taking into account the misdemeanour provisions contained in the Law, I think that the attitude of the holders of information towards the received requirements changes. The Coronavirus crisis may affect the untimely processing of received requests, which is mostly due to the fact that some employees are freed from performing their work tasks and/or performing them from home. Because of that, we have adopted 36 decisions to stop the procedure because, in the meantime, the applicant informed us that he received an answer to the request with a delay, that is, after submitting the complaint and withdrawing it.

Are you planning any activities towards the institutions that hold public information in the direction of their sensitization and in the function of their greater openness towards applicants and greater accountability in the coming period?

– Of course, as I have already said, in the period that follows, and immediately after the first signs of overcoming the COVID-19 crisis, intensive work will be done on systematic, continuous education of officials among the holders on the way of handling requests for free access to public information.

Namely, once or twice weekly training was scheduled to take place in the premises of the Agency, depending on interest. The training was also agreed upon with ZELS for officials in the local self-government, but I will restate that they were postponed due to the situation with the pandemic. Meanwhile, the idea of creating two video presentations, one for applicants and one for officials with information holders, is being put into action. A TAIEKS workshop entitled “The access to public information as a tool for investigative journalism and media” is also planned. This workshop will be held in October/November 2020.

In the direction of, as you say, “sensitization” and greater openness of information holders to requesters, the Agency in March 2020 prepared and, at the beginning of March 2020, published Guidelines for the implementation of the Law on Free Access to Public Information. Finally, I would like to emphasize that the Agency for the Protection of the Right to Free Access to Public Information is growing into a transparent institution, open to the media, NGOs, information requesters and holders, as well as the general public.