THIRD CONFERENCE OF THE “INITIATIVE 2020”: PROACTIVE TRANSPARENCY AND THE TROMSØ CONVENTION 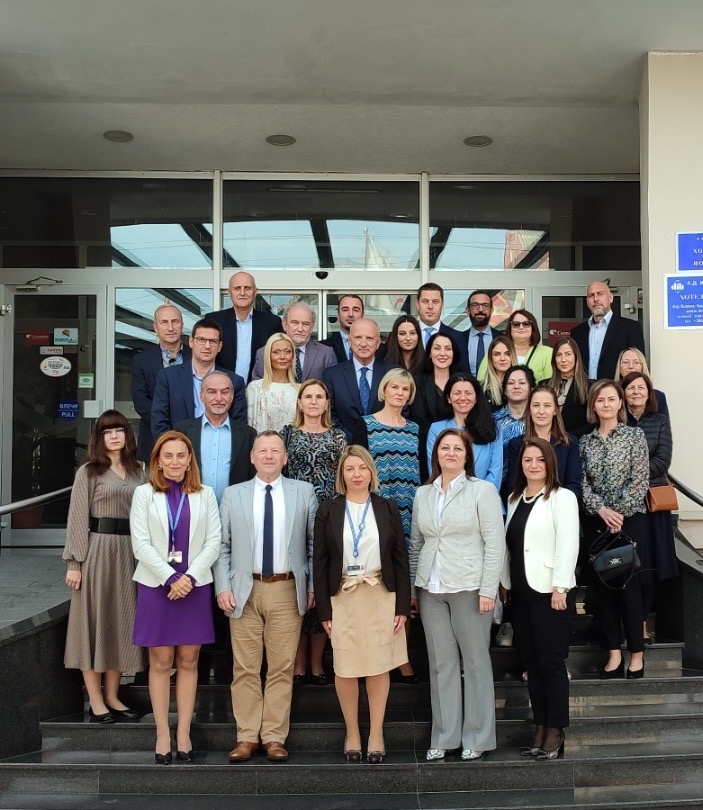 The joint project of the European Union and the Council of Europe, “Freedom of Expression and Freedom of the Media in North Macedonia (JUFREX)”, during the past two days, supported the Agency for the Protection of the Right to Free Access to Public Information (ASPI) by organizing the Third Regional Conference within the framework of “Initiative 2020”: “Proactive Transparency and the Tromsø Convention”.

The conference was attended by representatives from the management structures of the independent bodies for access to information, members of the “Initiative 2020” from Bosnia and Herzegovina – Antea Jozić (assistant ombudsman), Croatia – Zoran Pichulan (ombudsman for human rights), Kosovo – Krenare Sogojeva-Dermaku (information commissioner), Montenegro –  Ivan Medojevic (Commissioner for Information and Privacy), North Macedonia – Plamenka Bojcheva (Director of the Agency for Protection of Personal Data and Free Access to Information), Serbia – Milan Marinović (Director of the Agency for Protection of the Right to Free Access to Public Information), Mojca Prelesnik (Commissioner for Information of Public Importance and Protection of Personal Data and Slovenia), and Slavica Grkovska (Information Commissioner / Deputy Prime Minister in charge of good governance policies).

The purpose of the conference was to enable the exchange of experiences and knowledge in the field of Proactive Transparency, as well as the sharing of tools and lessons learned and the relevance of the application of European standards and the Convention of the Council of Europe, the  Tromsø Convention.

At the conference, the main focus was placed on proactive transparency in practice by presenting the undertaken activities, exchange of practical experiences, as well as familiarization with the following activities that will be undertaken for greater promotion of this segment of free access to public information.

The topic is of great importance, considering the fact that all stakeholders at the conference gave their views on a common contribution to raising the level of good governance of institutions and the improvement of services for citizens as information requesters.

The Council of Europe Convention on Access to Official Documents (CETS No. 205), also known as the Tromsø Convention, has been ratified in the region by Bosnia and Herzegovina and Montenegro, and it was jointly emphasized that the FAIPC laws go a step further in access to public information.

The Tromsø Convention recognizes the general right of access to official documents held by public authorities, which is a milestone in the promotion of democratic governance, openness, participatory democracy, and in the realization of other human rights and fundamental freedoms.

The application of these principles, as well as the importance of the application of European standards and the Troms Convention, is an incentive for other countries to ratify it as an additional tool for implementing laws on access to public information and as a reliable pillar for the protection of constitutionally guaranteed human rights: “I HAVE THE RIGHT TO KNOW!”.

Another added value of this Regional Conference was the participation of the delegation from the Office of the Commissioner for Information and Data Protection from Albania as observer(s), since they are not signatories of “Initiative 2020”. Taking into account the regional component of JUFREX, the participants from Albania had the opportunity to contribute their experience as they have signed and ratified the Tromsø Convention.

This Regional Conference was organized within the framework of the joint program of the European Union and the Council of Europe “Horizontal Instrument for the Western Balkans and Turkey 2019-2022” and the project “Freedom of Expression and Freedom of the Media in North Macedonia (JUFREKS)”.

The signatories of the “Initiative 2020” adopted the joint statement in which they agreed “that in the future proactive transparency will be the main goal for implementing the Law on Free Access to Information as a tool for transparency, accountability and openness of institutions”. The topic is particularly important, which can be observed through its proactive publication, i.e., active publication and updating of data published on the websites of public entities. Therefore, the proactive pblication should be a primary obligation and duty.

On the other hand, the reactive transparency, i.e., the procedure for acting on requests for access to public information should be a secondary obligation of the information holders”.

Finally, the signatories of the “Initiative 2020” agreed at the conference that the next conference would be held in Croatia.