FINAL CONFERENCE OF THE IPA 2 PROJECT: “PROMOTING THE TRANSPARENCY AND ACCOUNTABILITY OF THE PUBLIC ADMINISTRATION” 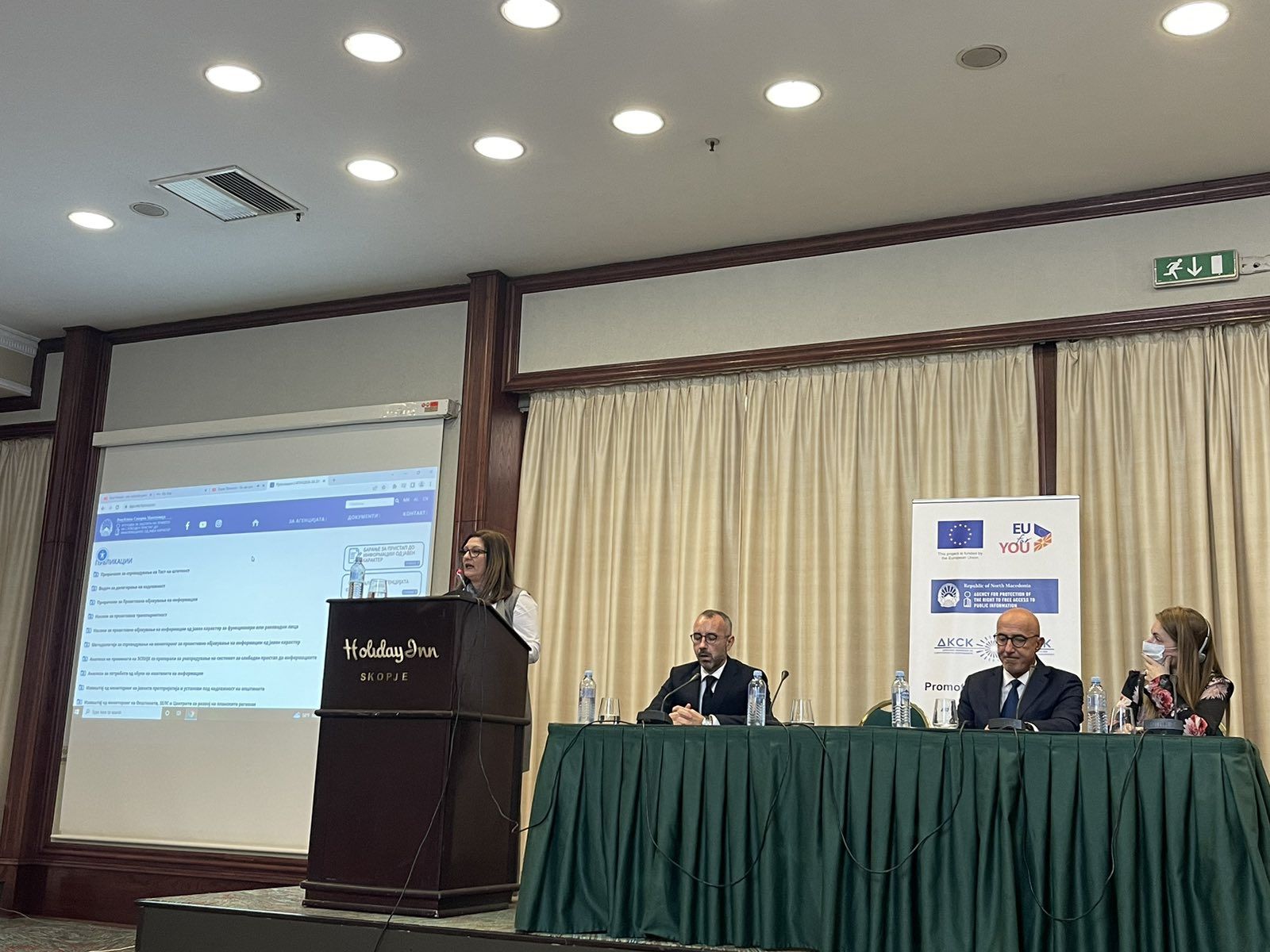 The final conference of the IPA 2 project entitled: “PROMOTING THE TRANSPARENCY AND ACCOUNTABILITY OF THE PUBLIC ADMINISTRATION”, financed by the European Union and implemented by a consortium led by PwC, together with the Foundation Program for Access to Public Information, was organized by PricewaterhouseCoopers.

The project was implemented in the period from November 2019 to November 2022. Agency for the Protection of the Right to Free Access to Public Information and the State Commission for the Prevention of Corruption were the project’s beneficiaries, with the goal of improving their operational functioning, contributing to the integrity and ethics of public institutions, and improving transparency and the responsibility of the public administration.

At the final conference, Mary-Medlin Kanelopoulou, head of operations of the European Delegation, Plamenka Bojcheva, director of the Agency for the Protection of the Right to Access to Public Information, Vlado Georgiev, Deputy President of the State Commission for Prevention of Corruption, and Dragan Davitkov, Project Director of PwC, had their opening address in front of the present representatives from the European Delegation in Skopje, the Agency, SCPC, representatives of the civil sector and journalists.

Director Bojcheva highlighted that “One of the bright spots during the crisis created by the Covid-19 virus” was this IPA 2 initiative, which helped the newly founded Agency accelerate its work and overcome the hurdles it experienced at the outset of its work.

– Upgrading the capacities and competencies of the Agency

– Support and strengthening of the internal operational and institutional capacities; and

– Support of the IT capacities for the implementation of the legal regulation for free access to public information.

Moreover, a Report on comments and debate regarding the Agency’s participation in the POV process, as well as comments on issues relating to the draft Law on the use of public sector data’s compliance with Directive (EU) 2019/1024 of the European Parliament and of the Council of June 20, 2019, on open data and re-use of information from the public sector, have also been prepared.

A Functional Analysis was drafted as part of the second activity, “Support and enhancement of internal operational and institutional capacity,” and served as the foundation for the drafting of acts for internal organization and the systematization of jobs at the Agency for the Protection of the Right to Free Access to Public Information.

Detailed discussions and interviews involving information holders, information requesters, and specialized public authorities led to the development of the Strategy for open access to public information for the period 2021-2025, as well as the Action Plan for the implementation of the Strategy.

As a further matter, an Analysis of the application of the Law on Free Access to Public Information was prepared with recommendations for improving the system for free access to information.

Since the right to access public information is fundamental to democracy, a study trip to Portugal, a member state of the European Union, was organized and carried out to facilitate the sharing of the experiences gained in this domain.

Concerning the third component, the Agency’s new website, two portals for information holders and requesters, document management system, case records, and electronic archive were all developed. There were numerous trainings conducted for the use of these IT tools, both for Agency employees and for approximately 1000 appointed officials for mediation with public information.

At the conclusion of her speech, Bojcheva expressed gratitude to the European Delegation for assisting the transformation of the Agency into an easily recognizable institution, one that is both a reliable advocate for the public interest and a rigorous defender and guarantor of the right to access public information.

In the second panel, Jure Skrbec, Aleksandar Kashumov, and Boro Jakimovski, three of the project’s leading experts, discussed the significance of the project’s findings for the future endeavors of the Agency and the SCPC.

The final panel, entitled “Integrity in the Public Administration,” discussed how a policy of integrity might improve institution-wide transparency and accountability. With the ultimate aim of facilitating enhanced effectiveness in fulfilling the rights of citizens and active involvement of all participants in the combat against corruption, professionalism and ethics will serve as the bedrock of employee conduct in this context.

At the close of the conference, it was determined that this project paved the way for addressing issues in the institutions’ work and will improve the upcoming projects, but also that access to public information will be the cornerstone to combating corruption.